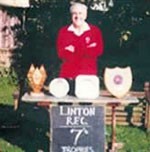 In the Spring of 1975, two rugby enthusiasts, Ron Huggins and Jack Williams, landlord of the Bull Inn, Linton, were drinking and talking rugby and the idea of a Sunday side was mooted with the intention that Ron would get some more games in his maturity and Jack in his ‘dotage’!
Ron and Jack were joined in their dream by two more, experienced players, Glyn Church and Brian Wright thus forming a nucleus for the Sunday Side. It soon became very popular, drawing Sunday players from other local clubs as well as the Pub. Many points were scored and many pints consumed.
A year later, Alex Hemming, the then Kent County President, in conversation with Jack Williams, suggested that the time was ripe for the side to become ‘legitimate’ and the name Linton, for the area rather than the Pub, was adopted. “Olly” Kverndal the then Secretary of the County set the wheels in motion by sending Jack the necessary forms and in reference to the Williams Welsh Ancestry the newly formed Club decided to play in Red Shirts. As the forms had to have a Club Secretary to send details to, Andy Smith was unanimously elected to the post, with Ron Huggins as Chairman and Jack Williams as President, Brian Wright as Fixtures Secretary and Treasurer and Glyn Church became vice-Captain, thus the four founders were involved in the administration and future of the Club. Jack Williams then took over the old Post Office, Linton for the purpose of giving the club a Clubhouse with a separate bar from the Pub.
Proposed by Canterbury RFU and seconded by United Services, Chatham, Linton entered the Kent County RFU in 1977 and later into the Rugby Football Union. At the same time Linton became members of the Kent Society of Rugby Referees. In 1985 Jack Williams organised membership, for Linton, of the Middlesex RFU thus entitling the Club to participate in the Middlesex Sevens.
In 1985 Jan and Jack Williams retired from the Bull Inn to Wales and the Club became ‘nomadic’. The Club became determined to find their own ground and build a clubhouse. This they did with the help of a select committee of young businessmen and ex-players, obtaining 14 acres of land at Aylesford, Kent where they became known as Aylesford Bulls RFC (formerly Linton).
The Club now has three first class pitches (two of which are flood lit), a superb clubhouse and runs Mini and Junior Rugby from U6s to U18s as well as two Senior XV’s in the league system and a Veterans XV. Our Ladies XV currently play at the highest level in the Premiership and we run girls U18, U15 and U13s sides.
Tweet
Tweets by @AylesfordBulls